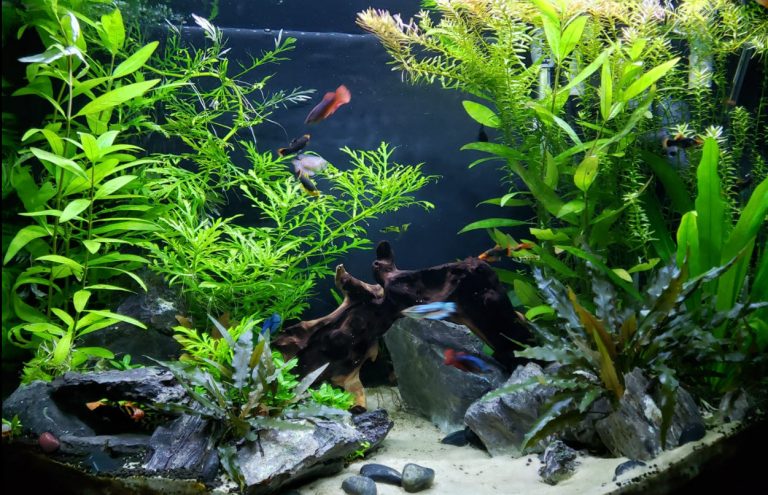 The author does not want to discourage newcomers to the hobby. But when it comes to plants there simply is a problem. Plants are not as easy as everyone says they are. Newcomers to the hobby should skip the plants and start with a lightly stocked “fish only” aquarium with several small fish and plastic plants till they get to understand the hobby better.

There are several very general, frequently not followed, recommendations for a planted aquarium:

The thing to key in on is the first recommendation: light stocking of fish smaller than two inches. This is where most hobbyists make their mistakes.

Many aquarium hobbyists start with both plants and large numbers of sizable fish in an aquarium. Then their plants start dying and/or their fish start dying and they keep replacing them and trying all sorts of things to keep them alive. Finally, after a few months or even a few years of fighting Mother Nature, they gravitate to either a planted aquarium with few fish or a fish aquarium with no plants in the aquarium.

The problem has to do with aeration. Moderate numbers of decent-sized fish like platy in an aquarium require good aeration or they get sick and die. Aeration kills plants as it removes carbon dioxide from the water. Plants feed on carbon dioxide. So one either kills the fish or they kill the plants.

The plants in the well-aerated aquarium below are probably going to die.

There have been photos on social media of roughly one hundred and fifty beautiful planted aquariums (the photos can all be seen at the link below). Three of those photos have a moderate amount of three-inch to five-inch fish among luxurious plant growth. Three!   147 of these tanks had only a few small one to two-inch fish in them.

Then there have been probably 100 photos of many three to five-inch fish in aquariums. Only ONE of those moderately to heavily stocked aquariums had real plants in them. These photos should tell a newcomer that keeping even moderate amounts of decent-sized fish in a planted aquarium can be a real challenge. Note that Mother Nature is very unpredictable and many claims to have no problem keeping many fish in a well-planted aquarium. The author has never been able to accomplish that in 55 years of fish-keeping.

If one wants plants with their fish some plants are the exception and simply can’t be killed and which seem to live under any conditions. While they will get some algae on their leaves the leaves are resistant to being smothered by algae. And they seem to live in all substrates under all conditions with no fertilizer at all. They even live in very low light conditions.

The plants that fit this description include Anubias (just don’t put the bulbs INTO the substrate), Amazon Sword (Echinodorus amazonicus), Java Fern (Leptochilus pteropus, synonym Microsorum pteropus), and Java Moss (Taxiphyllum barbieri). Java fern and Java moss are both “epiphytes” and need to be either attached to a surface like a piece of wood or they need a very open substrate like aquarium gravel. If you bury the crown on Java fern in sand it will die.

For more information on planted tanks click on this link: