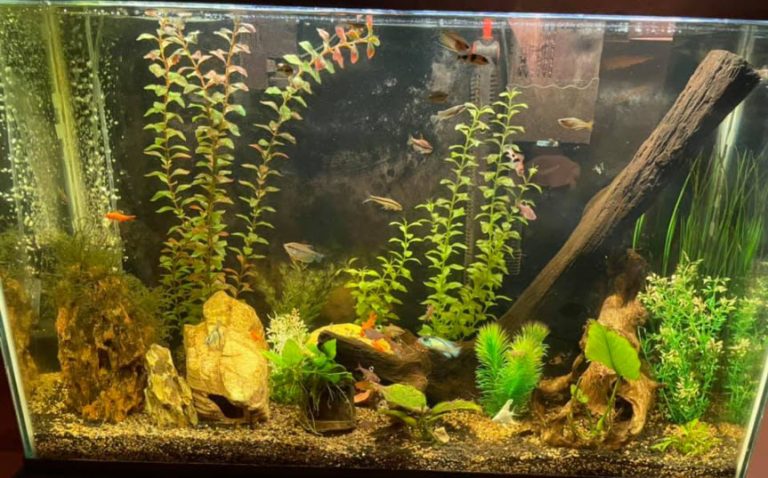 The number of fish and the size of the fish in an aquarium is called the “stocking” of an aquarium. Any beginner to the hobby should start with a few fish under three inches in size and gradually increase either the size or the number of fish in the aquarium over the span of at least a few months. Adding too many fish or too large of fish too soon can overload the filter and the aeration of the aquarium and kill the fish.

If one is new to fishkeeping, stocking is best looked at not by numbers but rather by water clarity. Slowly add some fish. Then see how it goes. Keep looking down the length of the tank and judging how clear the water is. If the water looks even a little bit cloudy do not add any more fish till the cloudiness clears up. Don’t worry about numbers. Gage the stocking by the health of the tank. How clear is the water? When the water is clear, add more fish. Cloudy water? Wait a while, till the cloudiness or “dullness” clears. Then you can add more fish.  Simple!

Note that it is little “science” involved in the whole topic of stocking. There is a series of journal papers on stocking of zebrafish which support VERY heavy stocking, two to five times the heaviest stocking the author recommends and six to fifteen times the stocking levels at the maximum levels recommended by web stocking calculators.  Other than those papers the whole topic amounts to nothing more than one OPINION after another OPINION. And the author’s OPINIONS are no better than anyone else’s OPINION on the topic.

The basic stocking rule that has prevailed forever is “one inch of fish for every gallon of water”. This is a decent gross approximation for beginners with their first aquarium and fish that are one to two inches long. The “rule” breaks down rapidly above two inches and for more advanced hobbyists. The beautiful Lake Malawi African cichlid peacock aquarium below shows how one can put hundreds of four to five-inch fish into a 100-gallon tank. This is at least five times the “one inch of fish for every gallon of water” level. And the water in this tank is crystal clear, indicating it is not overstocked and well filtered.

For a 50 gallon tank the stocking numbers are:

Number of fish for stocking in a 50 gallon or 189,27 liters aquarium

For a 25 gallon the stocking numbers are:

Number of fish for stocking in a 25-gallon or 94,64 liters aquarium

For a ten-gallon the numbers are:

Number of fish for stocking in a 10 gallon or 37,85 liters aquarium

For a five-gallon the numbers are:

Number of fish for stocking in a 5 gallon or 18,93 liters liters aquarium

These numbers simply reflect my OPINION as to stocking. There is little “science” involved, These numbers will send some self-appointed social media “experts” (i.e. the “fish police”) into absolute hysteria and get us kicked off many Facebook forums. But, in my OPINION, even the heavy numbers are easily achievable with no negative impact on the fish, SO LONG AS FILTRATION AND AERATION ARE ADEQUATE.

The heavy stocking columns for the ten and five-gallon aquariums have been crossed out for a reason. The filters for small tanks are always very small cartridges or air-operated sponge filters. These filters are just totally inadequate to support heavy stocking.

So small aquariums should not be heavily stocked. If one puts something like a canister filter on a small aquarium, one can think about heavy stocking. But I’ve never seen that done.

Note that the goldfish is very controversial. Common or “narrow-bodied” goldfish can be considered five-inch fish for stocking purposes. So-called “fancy” goldfish with short spines and fat bellies are different and need to be looked at as six-inch fish.

But there is a concerted campaign by PETA to make sure every goldfish in the world has at least thirty gallons of water per fish to swim in. The PETA folks are well-meaning but they are equating a fish with a person. This “anthropomorphism”, gives an animal the characteristics and emotions of a human. This simply isn’t true.

Goldfish are analyzed in more depth in this article:

When starting one should only stock at the light stocking level. Then in three or four months, one can move up to moderate stocking. And in six months, the aquarium CAN go into a heavy stocking. Note the emphasis on “can”. A beginner should take things slow.

These myths are all simply false, in my OPINION.

To go into a stocking in far more depth click on this link: