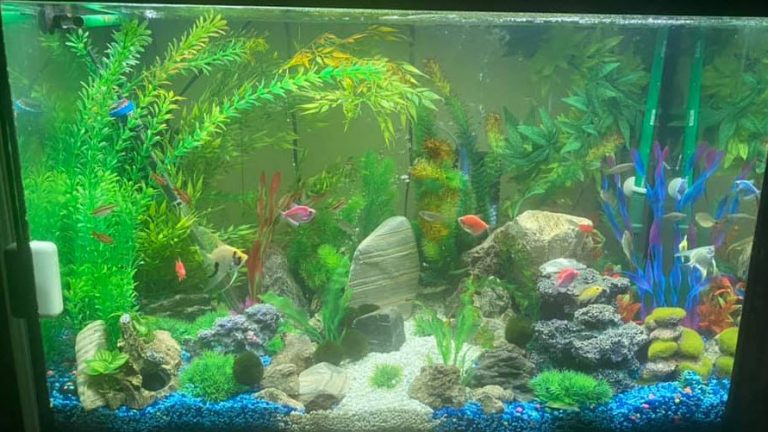 There are some things which kill lots of fish rapidly with no symptoms:

And there are other possibilities. Note the sudden death of several fish typically has nothing to do with ammonia or nitrite. Ammonia and nitrite are slow poisons, not fast poisons.

Most of the Possibilities

These are most of the possible reasons for the fast deaths of many fish in an aquarium:

Municipalities supplying water to homes sometime do what is called a “chlorine pulse”. Sometimes water suppliers put up to 4 ppm chlorine in the water. The normal dose of the conditioner will neutralize 1 o 2 ppm. That leaves 2 to 3 ppm to kill the fish. I once lost fifty large Malawi’s to a chlorine pulse.

The topic of a chlorine pulse is explained at length in this link:

5.5. Chlorine and Chloramine (links to aquariumscience.org)

And sometimes there is a type of chlorine kill that we feel bad about. Even the best of us make a common mistake. We simply forget to add a dechlorinator during a water change. And we get a tank of dead fish. The excellent YouTuber Tazawa did this. Killed a tank of fish. Tazawa is a credit to the hobby so we felt really bad for him.

IF AND ONLY IF one has a well and one does not have an aerating tank on that well, one can lose fish by a mechanism that mimics chlorine poisoning. Well water is typically very low in oxygen. If one does a 50% water change this can drop the oxygen levels by 50%. Many fish die quite rapidly at these levels. In a well-aerated aquarium the levels will come up rapidly (in a few hours) but many fish can be dead before that point is reached. So either the water needs to be aged for 24 hours or one should only do a maximum of 25% water change.

This well water can also have large amounts of carbon dioxide in it which adds to the low oxygen effects.

Another common rapid killer of fish is bacterial diseases, largely columnaris or Aeromonas. These bacteria can rapidly kill fish with no outward symptoms apparent.

A newly set up aquarium that has only been running for a few days or even a few weeks will have a lot of bacteria in the water column. Add very stressed new fish from the fish store and they often die overnight, overwhelmed by the combination of stress and bacteria. This is extremely common and invariably gets blamed on ammonia poisoning (i.e. “new tank syndrome”)

Bacterial diseases can arise spontaneously in an aquarium without the addition of any new fish.

Sometimes hobbyists do not do proper quarantine and get an outbreak of bacterial disease from new fish.

A very common thing is for a lot of fish to die and some to have white spots on them. The hobbyist then comes on social media and says their fish died from ich. Invariably when pictures are obtained it isn’t ich but rather a combination of columnaris bacterial infection followed by secondary epistylis. Epistylis looks like ich.

Treating bacterial diseases is covered in this link:

Epistylis is covered in this link:

Fish from a fish store has been through a lot when they are poured into a new tank. They’ve been chased, netted, bagged transported, and poured into a new tank. They often have just recently been subjected to rapidly enlarged swim bladder by being flown to the local fish store from Asia. Fish don’t do well with this handling. It often kills them rather rapidly. Note that it is the handling that kills them, not a difference in water parameters or temperature.

It is surprisingly common to have a single large heater and have it stick on, literally parboiling the fish. Using either two heaters or a heater AND a controller is important in any aquarium. It is also surprisingly common to have aquarium thermometers or controllers go “bad” and give completely erroneous readings.  94 degrees F (34 degrees C) or 60 degrees F (16 degrees C) can kill fish.

There is a common scenario with dead fish. Someone sets up a tank and puts in some fish without cycling the tank. When the fish are put in the aquarium one of the fish dies of shock. The death isn’t noticed. Because the fish are skittish and shocky, they don’t eat the dead fish. The dead fish decomposes. The decomposition products include a bunch of organic toxins and bacteria which kill most of the other fish in the tank overnight.

Note that the decaying fish body can also spike the ammonia somewhat, something which will only contribute to the deaths, not cause them directly.  And the new hobbyist comes on social media with their story. Then everyone on social media tells them ammonia killed their fish because the tank wasn’t cycled. This type of mass fish death rarely happens in well-filtered long-established aquariums.

Sometimes the hobbyist creates the aeration problem. Ben Ochart was using powerheads aimed at the surface in one aquarium. He turned the powerheads off overnight to “give the fish a rest”. Most of his fish died from lack of aeration. Ben is a credit to the hobby so we felt bad for him.

Some medications are a problem. Even slight overdoses can kill. Blackwater fish are especially vulnerable.

If a hobbyist uses chemicals like floor strippers or insecticides in the aquarium room, the fish can be killed very rapidly. Most household insecticides are now pyrethroids, which are quite toxic to fish. And don’t even think of leaving fish in a house being “tented”. The gas used in tenting will penetrate the best-wrapped aquarium in the world.

What is noteworthy is what is not on this list. “Bad water parameters” cannot rapidly kill fish. Neither can “new tank syndrome”, “stability problems”, poisonous gas, or electrocution rapidly kill fish. It just doesn’t happen. Each of these myths is examined below:

Ammonia and nitrite are NOT rapid killers of fish in an established tank, contrary to the many myths. The acute toxicity of various compounds in the aquarium is as follows:

To read the numbers for ammonia and nitrite simply determine the pH of the aquarium and find that pH on the left column. Then read across the levels that the API test will show. Start doing water changes at the yellow alert level.

The numbers for the toxicity of ammonia, nitrite, and nitrate will come as a shock to most experienced hobbyists. But the numbers are supported by a lot of research by universities. They are solid. It is rare for these numbers to be exceeded in an established aquarium. Here is a link to many articles on the subject:

Contrary to popular myth, rapid changes in any water parameters (temperature, pH, KH, GH, etc.) do not kill fish. In their native waters fish are constantly hit with sizable variations in water parameters and they do just fine. Here is a link to a full analysis:

4.8. Stability is not Important (links to aquariumscience.org)

Poisonous gas (i.e. hydrogen sulfide) categorically does not form in a substrate. Can’t happen, never happened, and won’t ever happen. This myth is delved into in more depth in this link:

One can probably count the number of aquarium fish that have died from electrocution worldwide in a year on one hand. It is theoretically possible to electrocute fish.  But the combination of events that would lead to such an occurrence is virtually impossible in aquariums. This is analyzed further in this link: