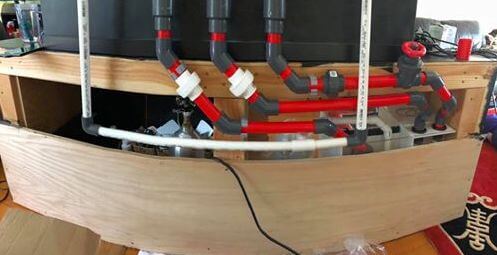 Over the years I’ve had many cases of failed plumbing. And I’ve learned to avoid any plumbing which doesn’t conform to the building code for potable water in the home. A leak can just be disastrous.

Recently Joey had a major leak on his 2,000 gallon tank when some large tubing tore open. Of course Murphy’s Law applied and it happened when Joey was away at a convention and no one was home to find and stop the leak.  A thousand gallons of water can do a lot of damage very rapidly. Joey was using thin walled ribbed flexible tubing with a helix reinforcement (it looked like tubing used in outdoor swimming pools). This hose looked like this:

Avoid this type of tubing like the plague. It is decidedly not designed for indoor plumbing. This tubing also produces something called “turbulent flow” rather than “lamellar flow”. This means a pipe must be 50% larger in diameter to carry the same amount of water at the same pressure as a smooth bore pipe.

Several popular canister filters (Fluval FXs for one) use a variant of this type of hosing. And there have been many posts on social media about the Fluval tubing giving leaks. If you have a canister filter with hoses like this replace the hoses with potable water plumbing and/or heavy duty nylon reinforced industrial tubing.

If you are stuck with hoses like this attach straight pieces of PVC to the hoses to prevent sharp hose radii which stress and weaken the thin walls of this tubing. Never allow excess ribbed tubing to fall towards the floor in a loop and then go up to the aquarium. This is a formula for one very big leak.

Note that many other canisters (SunSun and Eheim) use a clear green tinted thick-walled vinyl tubing. This tubing won’t leak but it does easily kink, which can shut the flow down to a dribble.

Some setups use something called “barbed fittings”. These types of fittings need to be avoided in the aquarium hobby.

Flexible plastic tubing of various configurations is pressed over the barb. This is a common fitting on the cheaper aquarium pumps. The tubing depends on the flexible tubing to maintain a tight seal.

The problem here is that ALL flexible plastics undergo something known as “creep”. Because of creep this seal starts leaking after a period. If you have a system with this type of barbed seal add a metal hose clamp to each fitting around the hose. This will prevent the seal from leaking.

I only plumb sumps and my continuous water change systems with schedule 40 PVC. I prime (clear primer) and sandpaper all joints on both sides of the joint to insure a joint which will never fail. PVC has a film on it. The film is a compound called a “plasticizer”. This is like a very heavy oil that is very difficult to clean. This heavy oil interferes with the bond of the adhesive. So it is important to prime and roughen the PVC before assembly with an adhesive.

Apply a primer to both surfaces of PVC to be bonded. Then take sandpaper or a wire brush and lightly abrade the surface which has just been softened by the primer. Apply the PVC adhesive then force the two pieces together with significant force and a twisting motion. The will insure a leakproof, failsafe bond.

It is also vital only to use PVC cement for PVC. Using something like a silicone adhesive with PVC piping will guarantee failure and leaks.

Note that there is some flexible PVC pipe which is approved for some applications in the home. It is primed and glued into place just like rigid PVC pipe. It is typically reinforced with spiral steel wire. This is an excellent material.

Piping should be designed to the following sizes:

Note I tend to be very generous in my pipe sizing as I don’t want to restrict flow and PVC pipe is cheap. Also note that most aquarium pumps are not high pressure pumps. So using the “gravity drain” sizing in all aquarium plumbing is wise.

Note that if one uses the “Average Pressure” piping size in a sump piping, one has to be careful of the way the piping is put together. Any ninety degree elbow will add one foot to the “head” the pump sees. One can do it in two forty five degree elbows with at at least six pipe diameters separation distance between the two elbows. Or one can just go up in pipe size. Or one can use flexible PVC pipe.

And I am very free with unions in my designs. If you have to tear down a set-up or modify it the last thing you should be doing is sawing the pipe. Lots of shut-off valves are also a good idea. Slip unions with multiple diameters allow one to adjust lengths and are also very useful.