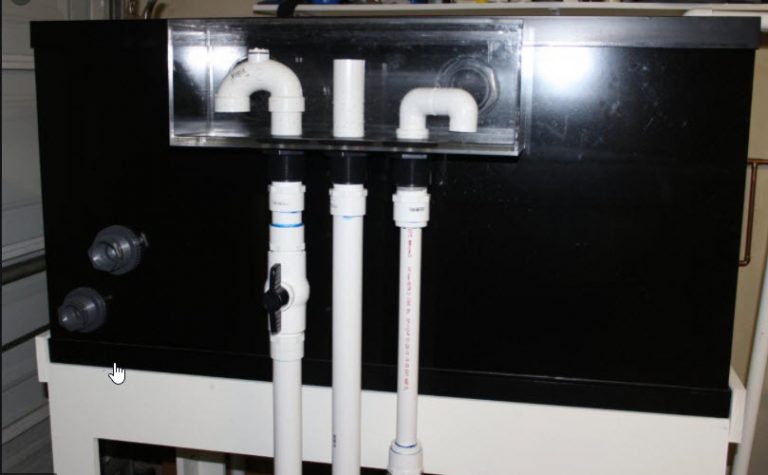 When one uses a sump the pump in the sump moves the water back up to the aquarium. Then there needs to be a way of moving the water back to the sump and to prevent the aquarium from overflowing. There are a huge number of DIY devices on the internet and YouTube that are designed to do this.

Note that a drilled tank needs special considerations if the water flow is down to a canister. The water level in the tank needs to be much higher than the drilled hole so that the piping flowing down to the sump is always completely filled with water. If the water is just flowing though an overflow in such a way that air can get into the piping leading to the canister, the canister will not flow very well up to the aquarium. The canister pumps are not designed to work without a “head pressure” feeding them. I simply do not recommend the siphon overflow designs here in or a drilled tank if one want to use a canister. Simply put the inlet hose of the canister in the aquarium.

Many prefer a variation of the simplest overflow design:

It is best to put two of these in each aquarium in case one loses vacuum on the siphon for some reason.

This simple design can be modified to:

The operation of this overflow is easy:

Again, put 2 of these on each aquarium as a cheap insurance policy.

The clear PVC plastic can be obtained form many suppliers on the internet. United States Plastics Corporation has the following selection:

The above design can easily be made silent by making a double version of them into what is called a “Herbie overflow”. Make one of the two tubes have a level that starts working at a level about one fourth inch below the top of the aquarium.  Put the outlet of this overflow above the water in the sump in such a way that it will be very noisy and acts as an alarm for the hobbyist that the primary overflow isn’t working. This is the “safety overflow”.

Then add a valve to the down pipe of the other overflow. Put the this valved overflow about two inches below the top of the aquarium. This is the primary overflow. Place the outlet of this pipe below the water in the sump.

Adjust the valve on the primary overflow to the point where the tube below the valve is completely filled with water. This may require some delicate adjusting and some downsizing of the pipe below the valve. This design is toted as totally silent. While I’ve found it works great when one adjusts it properly, it requires constant adjusting. I prefer gravel filled oversize overflow pipes.

There is another very popular DIY (do-it-yourself) version of this overflow in use. Joey’s YouTube DIY videos show how to make these designs as do dozens of other folks on YouTube. Joey (“The King of FIY) also has a DIY aquarium book which goes into this design in detail. I highly recommend buying this book if you like DIY aquarium projects. The height of the water in the aquarium is determined in this design by a weir in the aquarium. This design has more obtrusive plumbing in the aquarium than the first design.

This simple design can be embellished in several variations:

This design uses a pipe around a pipe weir design, which to me is much more attractive in the aquarium than the previous weir design.

Note some people just glue an air tube to the top of the siphon in order to create the siphon. Other just plunge the whole thing into a aquarium of water and then throw it over the side with a thumb over the air hole.

This is what this design looks like in practice:

This is straightforward plumbing that anyone can do. The challenge with this design is creating the siphon. Because everything is hard plumbed this creates a bit of a difficult process. But the process becomes clearer when the sump plumbing is examined:

If you close the valve in the outlet over the sump, one can pull suction then on one of the air holes while covering the other air hole. If done carefully you can create two siphons. Two valves, one in each return line, would be better. It is also possible to snake air tubes through the tubing to pull siphons and using clear piping to insure the siphons are both complete with no air bubbles.

There is an expensive version of this weir design sold commercially. This is the Eshopps overflow box

This box (really a double box) uses a weir in the aquarium to determine the height of the water in the aquarium. The water then flows through a siphon to an exterior box where the siphon is maintained by a baffle before going down to the sump.

There are also a whole series of “overflow boxes” sold largely for use in the marine aquarium (Durso Overflow, Herbie Overflow, Bean Animal Overflow). They can be used as a weir design mounted in the aquarium if the aquarium has one to three holes drilled in the bottom of the aquarium. If there are no holes in the aquarium, then a siphon tube must be added to the design and the boxes mounted external to the aquarium. They are used to prevent pipe gurgling in high flow situations.

Supposedly these designs silence the gurgle of the water falling in the pipes. Most people find they need constant fiddling with to keep them quiet. And they are very expensive. The media filled 2x drain pipe of the second DIY design is a much better option. Note the media must be large in these silencers. A small media will plug up rapidly.

All these overflows need to be designed for the following gravity drain piping sizes:

For overflows use the recommendations of the “gravity drain only” one should go oversize on this piping and as use two overflows. PVC is cheap and a wet rug and wet hardwood floor can be very expensive (believe me, I KNOW!).