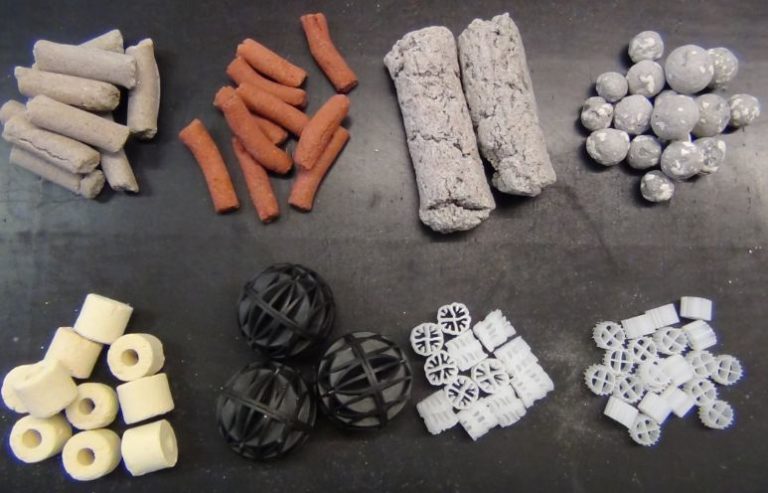 The author would like to be able to say he knew what this testing revealed all along and has been using 100% foam, pot scrubbers or K1 in all his many canisters over the 53 years he has been keeping aquariums. That would be a lie. For some 45 years the author had used a combination of all the media that came with a canister, a ton of a huge variety of media which was on his garage shelving, and media he bought. Most of his canisters were filled with a pretty random combination of Matrix, ceramic rings, lava rock and bioballs.

The author simply felt that the media in a filter wasn’t very important and they were all pretty much equal. The author was wrong, dead wrong. Whoops!

“After reading through many of the various articles you confirmed what I suspected for many years regarding ceramic media. I always had a nagging suspicion that biofilm was found predominantly on the surface (not internal pores) of all this expensive media I have purchased. My suspicions were confirmed earlier this month when I foolishly replaced all of the outer foams on both my FX6 filters. The filters’ internal baskets were filled with “high quality” spherical sintered glass media which should have housed all of the beneficial bacteria but the tank had a tremendous bacterial bloom after that sponge replacement which made me think that the outer sponges were housing a significant portion of the bacteria. I stumbled across your page a few weeks later and was kicking myself.

I have since replaced both FX6 filters with two Eheim filters which combined hold 4 gallons of media. I owned Eheim filters in the past but it got rid of them because I fell for the “maximum tank turnover” provided by the large FX filters based on youtuber claims (mistake). I gradually swapped media and filled the two new Eheim filters with Kaldnes media in a static configuration and I’ve been monitoring parameters and the water quality is great (zero ammonia and zero nitrite). I opted for Kaldnes as a static media over 30ppi sponge to avoid early clogging in an African cichlid tank holding 25 fish between 2 and 3 inches long.”

To see what this commentator is talking about just read on.

What is the “Best” Filter Media?

What is being missed is the concept of crystal clear water. That is water so clear that if you look down the length of a six foot aquarium you would think the fish are swimming in air. Crystal clear water requires twenty times more surface area that does ammonia oxidation, confirmed by controlled testing.

Abstract of a Filter Media Tests

A series of some six tests were run on the capacity of filter media.

This was a total of 55 tests of media. All the tests correlated well with foam, pot scrubbers and K1 media significantly outperforming ceramic rings, Matrix and Biohome in ALL the tests.

One very important decision to make in the area of filtration is what media to use in the filter. In many ways this is more important than choosing a filter. The most important function of the media is ammonia oxidation.

The higher the numbers here the better the media. This makes 30 ppi foam the best static media and ceramic rings the worst media for canisters. The complete test procedure used to come up with these numbers is outlined in the following link:

Most hobbyists do an interesting thing. They mix their media. It is not uncommon to see eight types of media in a sump or six types of media in a canister. Since all biomedia do exactly the same thing, namely provide surface area for beneficial bacteria to grow, this is just rather humorous. But EVERYBODY does it, including the author prior to doing this testing!

Since the media with the greatest surface area is also the media which will plug up the fastest, this use of many types of media can be counter productive. For instance, if a hobbyist has some 30 ppi foam in a canister filter along with some Matrix, bioballs and ceramic rings.  The 30 ppi foam clogs at four months. so the hobbyist takes apart the filter and cleans ALL the media. Cleaning the Matrix, bioballs and the ceramic rings is decidedly counter productive.

These claims are all just marketing hype easily debunked. But these claims do serve the purpose of making a lot of money for some creative aquarium supply manufacturers and distributors.

The links below are a complete review of all the filter media, discussions of each media in depth, the calculations needed to work out how much media one needs for various situations and discussions on media which just don’t work as advertised: