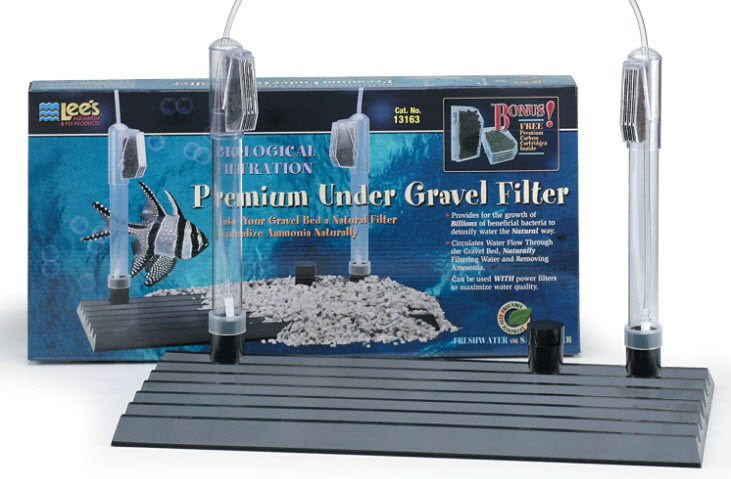 Ahhhh yes the myths live on.

Aquarium equipment manufacturers and fish stores who want to sell expensive canister filters (ah, the profit motive at work!) have invented a whole host of negative points about under-gravel filters. None of these points withstands scientific scrutiny. Under gravel filters are still one of the best forms of filtration out there.

Note the brightest, most honest fish keeper in the business, Cory of Aquarium Co-op, recommends under gravel filters. Most shops do not promote them because it is a onetime low profit purchase with no return business. Air operated under gravels have no moving parts that need replacing.  I have been using some under-gravel filters for some thirty years and they are still working well. If one can get five years out of most canisters and HOBs, you are doing well. External filters frequently leak but under gravels cannot leak. Canisters frequently spring leaks.

Note that if you clean under gravels frequently, they are a pain in the butt and do not work. If you just leave them alone, they are a great, inexpensive filter with a huge bioload capacity. Put a powerhead on them and they become even better biofilters. “Old technology” like under gravels have only been superseded by our need for shiny new things and expensive “must-haves” that we do not really need.  I have them in sixteen tanks and love them.

Under-gravel filters are great for biofiltration (the media volume is second only to sumps) and crystal-clear water AS LONG AS YOU DON’T CLEAN THEM BUT EVERY FEW YEARS. The brown “gunk” in the gravel isn’t fish feces or “accumulated nitrates”, it is a soft biofloc filled with beneficial bacteria and many other beneficial organisms which are very good for your aquarium (“beneficial bacteria ain’t pretty”).

The brown filter sludge in a filter is for the most part alive and not simply waste. Removing this mud does more harm than good. The purpose of the filter media is not to filter out particles from the water as is often assumed. The media serves as the habitat for a vast array of microorganisms that include bacteria, archaea, worms, ciliates, flagellates, and many others. These microorganisms live in a community that is based on biofilms. The biofilms are created by bacteria that secret extracellular polymeric substance (EPS), which is often called “slime”. The community forms a bioreactor that processes the waste and turns it into food and energy for its members, and ultimately into organic or inorganic products that are then used by plants, evaporate, or removed by water changes. It takes a considerable amount of time to establish this “filter community”; consequently, it is very important not to disturb it unless absolutely necessary.

This is a probably the most intelligent statement any aquarium products distributor has ever made.

By the verb “clean” above, we mean stirring up the gravel and creating a brown soup which is then removed.  We do not mean cleaning under the plates or dismantling the whole thing. There is NEVER a need to do that. The gravel of under-gravel filters will never go hypoxic so bacterial toxins are not a worry if the gravel is stirred.

If under gravels are frequently cleaned (and the term “cleaned” includes “deep vacuuming”) they do not work. But if one uses cheap food that is loaded with fillers one can clog up even an under-gravel. So if your food is under 40% protein, one can vigorously stir up an under gravel once a year or so and then remove 75% to 95% of the brown water. The brown water left behind will reseed the under gravel very rapidly. And the fish won’t be harmed by the brown gunk in the water column.

We’ve used under-gravel filters in typically five to fifteen very heavily stocked tanks (which included large digging cichlids) for fifty years with cleaning every two or three years. They have given us: no ammonia spikes, no build-up under the plates, no “exposed plates”, no “nitrate factory”, no “clogging”, no “disease reservoirs” and no “anaerobic dead areas” (even under décor). And we currently have very heavily stocked cichlid aquariums.

And then there is the mechanical problems of hang-on-back and canister filters. We’ve had lots of leaks, seized pumps and noisy pumps with hang-on back and canister filters. Sometimes they have leaked out of the box. And they only last two to five years in my experience. We’ve had several floors damaged by leaks. That is an expensive failure. We’ve had some under-gravel filters for thirty years (maybe even much longer!) with no problems what’s-so-ever and no replacements of anything.

How an Under-gravel Filter Works

Under gravel filters consist of a plastic grate or “filter plate” which lies under small gravel in the aquarium. This plate allows water to flow freely under the gravel. Water is lifted up a “lift tube” by a flow of air. This flow then draws water down through the gravel. The gravel then acts as an excellent biological filter.

Operation of the undergravel filter

And the type of air lift used is important. Many under-gravel filters use a simple hole to produce very large bubbles that rise in the air lift tube. Modify any such filter to use an air stone. The large bubbles are very noisy and throw spray in all directions when they surface.

One can alternatively add a pump called a “powerhead” directly to the top of the lift tube. Power heads move more water than air stones and gives somewhat better biofiltration. There is no need for an air pump, air stones or air tubes with the powerhead. This makes the cost of the two systems quite similar.

This diagram shows how to use a powerhead with a under gravel filter. If there are two lift tubes use two powerheads.

Another idea which came from Cory of Aquarium Co-op is to put the suction end of a canister on the top of the undergravel filter tube. This is a GREAT idea. It is the equivalent of putting a powerhead on an under-gravel while it does excellent mechanical filtration for the canister. It is especially good in a tank with fry as the flow into the undergravel isn’t large enough to trap the fry or suck them into the canister pump blades.

Comparing Under-gravel filters to other filters gives the following:

# of 3″ Fish*  refers to the number of fish for which this filter can give very clear healthy water. Ammonia oxidation is twenty times easier and these numbers can be multiplied by twenty if the only consideration is ammonia.

Note that under-gravel filters need to be purchased on the internet now-a-days due to the determined efforts of the profit minded filter manufacturers (Petco still stocks them). Also note that it is very feasible to buy an under-gravel filter for say a 30 gallon aquarium and install it on ANY tank larger than 30 gallons.

Note also that for some inexplicable reason the price of aquarium gravel has skyrocketed lately. Some of it is selling for $1 a pound. At three pounds of gravel for every gallon of tank that is $150 worth of gravel for a fifty gallon tank. But note that aquarium gravel is pretty standard as a substrate. Sand is cheaper but has some serious drawbacks.

A great alternative is the oil absorbent sold by Tractor Supply and some Walmarts. It is inexpensive. If one can find the rusty brown form it is  very attractive in an aquarium. The gray is less attractive. Note I have NOT had any plugging from the large amount of fines found in this substrate.

Many well meaning but ill-informed commentators on social media pan under-gravel filters and very few hobbyists use them as a result. The problem is that the panning originated in the marketing departments of manufacturers and suppliers interested in selling expensive canister filters. When local fish stores realized they made more money on expensive canister filters sales then inexpensive under-gravel filters they joined in the chorus. Isn’t the profit motive wonderful?

And then social media got involved. The well meaning but ill-informed commentators on social media did the standard thing of parroting what they had heard from other posts. What the parrots failed to realize is that those posts were put there by canister manufacturers. We have documented this form of social media “influencing” by manufacturers of expensive aquarium goods.

The chief complaint we see about under-gravel filters is that it is “antiquated technology” or “old school”. Since when is something “bad” simply because it has been around for a long time? Is the wheel antiquated?

Then we point out that all good filters are nitrate factories. Indeed, the function of all biofiltration is to oxidize ammonia to nitrate and that one gram of ammonia nitrogen is converted to one gram of nitrate nitrogen regardless of where or how it is done (this is a basic law of physics called “conservation of matter”). They then fail to come back 100% of the time. They have no comeback possible.

Another common complaint is that the brown gunk that builds up in the gravel is very bad “dirty” stuff that is very detrimental to the aquarium. This idea that brown gunk is detrimental is the single biggest myth promulgated in the hobby. We go into that in great depth in the undergravel in depth link below (and in many other articles throughout this website). The brown gunk is beneficial bacteria and other organisms which reduce the pollution in the aquarium, not add to it.

There are some aquarium hobbyists who are interested in delving deep into the science and the calculations behind all aspects of the hobby. For those who are so inclined the following is pertinent:

We have designed a DIY undergravel filter for those with a DIY bent. It is not cheap but some want such a design:

Bottom of the Tank Matten Under Gravel Filter