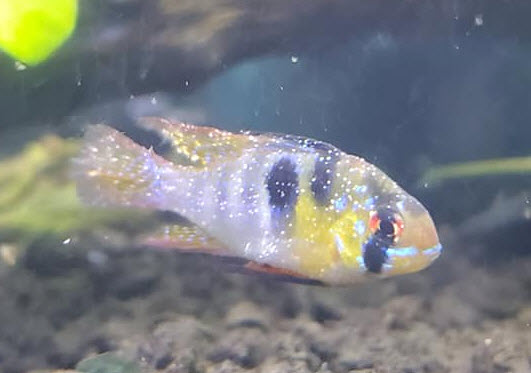 Fish in a newly set up aquarium often get little white spots all over their bodies. This is a disease called “ich” or “white spots”. Treating ich is very easy. Just use formalin/malachite green (Ich-X, Rid-Ich Plus, Blue Planet White Spot Remedy, and Mardel QuickCure) to treat ich in freshwater fish.

Below I get into ich in more depth than I like. But there is a huge amount of misinformation out there. Easily 80% of the advice on social media is just well meaning but wrong. So there has to be more discussion than I would like for an introductory discussion.

Summary for White Spot or Ich

MYTHBUSTER: ALL the well-done scientific studies by researchers on heat and ich have found heat to be totally ineffective in treating ich!

Note there are two other diseases that look like ich (tetrahymena in livebearers and epistylis in other fish). So make sure you have ich.

The seminal study on ich treatments (Tieman and Goodwin, 2001) found salt (0.25%) and heat to have no effect on ich. Other studies say 0.5% to 1% salt can reduce mortality from ich but is not as effective as medication. UV sterilizers, even at low wattages, can help immensely to eliminate ich from the aquarium.

Established filters have thousands of little carnivorous critters in them which eat the infectious ich stage (the “theront”), so the filter is very important. The net result of this filter “medication” is that if you have a long-established aquarium filter with plenty of brown “gunk” in it, it is perfectly OK to do absolutely nothing for the ich. It will simply go away on its own in a week or two.

Ich in a Little More Depth

Ich is the most common aquarium fish disease that is easily recognized (fish TB is much more common but doesn’t cause symptoms during most infections). Ich is a disease that is commonly encountered by newcomers to the hobby. So an article for newcomers on ich seems appropriate.

Ich is a disease that looks like a fish that has had white salt grains sprinkled on it. The white spots MUST be small, the same size as a grain of table salt, and no larger. If the spots are larger it is not ich but rather epistylis or tetrahymena. Epistylis and tetrahymena mimic ich and pictures of these two diseases are commonly labeled “ich” by all the well-intentioned commentators on social media. Another characteristic of ich is that the white spots of ich are everywhere on the fish. Epistylis and tetrahymena occur in patches.

Ich is rarely fatal in an aquarium with an established filter with a lot of brown gunk in it. But a new tank with a new filter that hasn’t built up some brown gunk can have fish fatalities with ich. So I always recommend beginners get some Ich medication with their new aquarium. Treating ich is very easy. Just use formalin/malachite green (Ich-X, Rid-Ich Plus, Blue Planet White Spot Remedy, and Mardel QuickCure) to treat ich in freshwater fish.

For a far more in-depth analysis of ich click on this link: