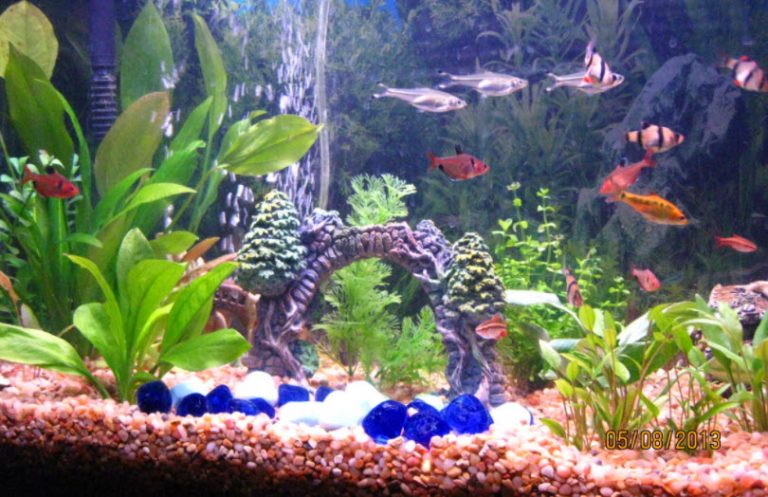 As for the selection of fish for a beginner, some fish are quite accepting of the mistakes we all make as beginners to the hobby. These fish are:

All these fish will do well in any water from 6.5 to 8.5 pH and 65 to 85 degrees Fahrenheit (18 to 29 degrees Celsius). They will all co-exist with each other save for the fact that goldfish will eat minnows and other small fish. Also, the glofish sharks tend to be aggressive and get large. If your tank is less than 15 gallons, I recommend only one species in a tank.

Schooling fish MUST be in schools of at least six and preferably ten fish. This is not to keep them “happy”. This requirement is because, in an aquarium with other fish species, these fish CAN become very aggressive if not in a school. The aggression is defensive in nature. Schooling fish literally become “scared” and lash out if not in a decent sized school.

Groups of two or three fish of species like tiger barbs, serpae tetras, black phantom tetras, zebra danios, and most glofish (bettas and sharks being the exceptions) have become killers in SOME aquariums. Sometimes these fish have killed much larger fish like angelfish if they are not in a decent-sized school. So a school is a requirement.

Note that neons, cardinals, and rummy noses are NOT easy fish. Also, note guppy and mollies are not on this list. The highly inbred fancy guppies are very difficult fish for some. Especially the males seem to be very short-lived.  But many beginners are successful with them. Mollies are similar. Different guppy and molly strains are inbred to different degrees and thus the huge variation in viability. More about guppies and mollies in this link:

17.6 Guppies and Other Livebearers (links to aquariumscience.org)

Probably the most common fish that beginners start with is the Goldfish. The goldfish has a huge number of “fish police” that absolutely demand you have at least 30 gallons of aquarium for every goldfish. This is ONLY their OPINION. There is no scientific basis for the claim.

My OPINION is that goldfish are just fine in a small aquarium. The five longest living goldfish ever recorded were all in small five to ten gallon tanks and were obviously “thriving”. If you want the truth about keeping goldfish go to this link:

A fish that has had a lot of propaganda spewed about the size of its tank is the betta. The sizing of a tank for bettas also has it cadre of “fish police” who loudly and vociferously proclaim that bettas should never, ever be in less than five gallons. They have a right to their OPINION and I have a right to my OPINION. I’ve seen bettas doing very well in half-gallon tanks. For information on keeping these somewhat unique fish go to this link:

And a very popular type of tank that many beginners like to do is an African Cichlid aquarium with Lake Malawi Cichlids. This is a link to information on them:

Another special situation is the stocking of very small two to ten-gallon tanks. This is called a “nano” aquarium and is covered in this link:

None of these are beginner fish. They are all from blackwater regions and need special care. More about this on this link to blackwater fish:

And one type of blackwater fish that is much more difficult to keep properly than many hobbyists think is the Oscar. For information on the Oscar go to this link: