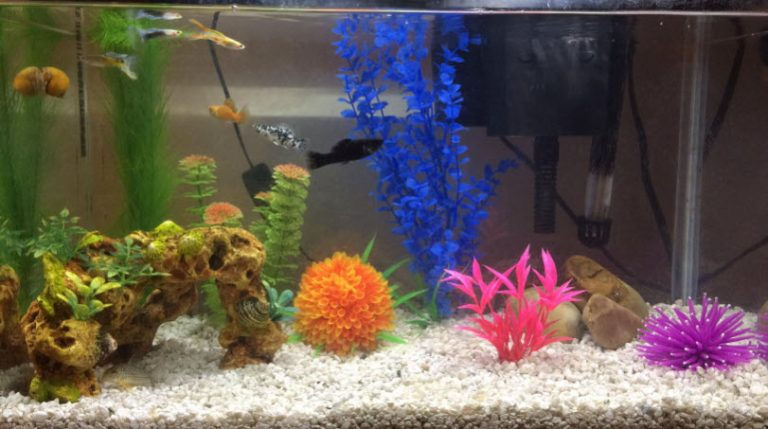 The simplest way to “cycle” an aquarium before adding fish is just to add half a teaspoon of fish food per twenty gallons once a day for six weeks. Do NOTHING in those six weeks, even if the tank gets gross. “Cycling” is the term used for growing colonies of something called “beneficial bacteria”. These bacteria convert toxic fish pee (ammonia) to a relatively innocuous compound called nitrate. Growing these colonies normally takes 4 to 6 weeks. These colonies are the brown gunk that forms on the filter media in the filter.

There are literally hundreds of ways to successfully “cycle” an aquarium. This makes any discussion of cycling a bit verbose and lengthy. What follows below are short synopses of the two most common methods: Fish-in cycling and Fishless cycling.

“Cycling” is the term used for growing colonies of something called “beneficial bacteria”. These bacteria convert toxic fish pee (ammonia) to a relatively innocuous compound called nitrate. This process is called the “nitrogen cycle”. These colonies are the brown gunk that forms on the filter media in the filter.

In a new aquarium being started up these “beneficial bacteria” take anywhere from 2 to 8 weeks to grow to sizable colonies. So, if you put fish in an aquarium right away, those fish may get very stressed from their pee and may, in extreme circumstances, even die. Note that one has to add a lot of fish to a new aquarium and feed them a lot to get conditions that harm the fish.

Most hobbyists start up a new aquarium by running it as a filtered heated aquarium with food being added daily for 4 to 8 weeks. This is called “cycling” an aquarium. Typically, this is best done with no fish in the aquarium. Easy.

Note that if a newcomer to the hobby goes up on social media and asks how to cycle they will get a huge number of conflicting answers. The reason for this is simple. There are hundreds of ways to cycle an aquarium. Indeed, if one doesn’t formally cycle an aquarium, Mother Nature will do it for you. Thus the confusion.

Directions for a Beginner

If you are a beginner with a new aquarium, keep things simple. Fill the aquarium with water and add chlorine conditioner per the directions. Start all the filters. Don’t add any fish or any plants. Wait at least four weeks before adding the fish.

Add at least one level teaspoon per 25 gallons of brown gunk-filled material from an established aquarium filter (the best material), composted (WELL COMPOSTED, not fresh!) cow manure,  or dirt from the garden, or the soil from a potted plant to the new aquarium. These “seed” materials all contain lots of beneficial bacteria which will jump-start the cycling process in the aquarium. Note commercial packaged potting soils are sterilized and will not work. Put the seed material in a sock and put it in the filter. Squeeze the sock every few hours. Remove the sock after two weeks or so.

Aerate the water well with air stones and an air pump. Add about one-half teaspoon of dry fish food per 25 gallons of water per day. Keep adding the food daily till your tank is cycled. The food will get all gross with white “stuff”. Ignore it. The food has to decompose to feed the beneficial bacteria.

Just let the aquarium and the filter go for about four weeks with no water changes or filter cleanings. The tank may get very cloudy and even smell. Ignore it and just be patient. When the water clears or after at least four weeks of feeding your tank is ready to add fish. Easy!

For more in depth directions on cycling an aquarium without fish in it go to this link:

Many newcomers get fish when they buy their aquarium. Luckily most folks start with something like “five little tetras of various types, a glofish, and two platies in a 20-gallon aquarium”. This is very light stocking and the fish will do decently well if fed lightly. One term for this is “fish-in cycling”. Many experts recommend this method of cycling a tank as the least complicated and easiest method for a beginner to understand and practice.

This is contrary to what all the naysayers say on social media but newsflash, fifty years ago no one did “cycling”. They just tossed the fish in. And if they didn’t stock too high or feed too much they were just fine! The fish lived long and “happy” lives.

Note that we don’t recommend fish-in cycling, fish-less cycling is the method we prefer and use. But it is extremely common for a newcomer to the hobby to find themselves with some fish in an aquarium that isn’t cycled. The newcomer must realize that they can do a fish-in cycle very easily with absolutely NO damage to their fish.

For simple “fish-in” cycling (cycling with fish in the aquarium) just feed the fish very lightly for the first few weeks. The water may turn cloudy or even green. Do no water changes. Just let the aquarium do its “thing”. After four to six weeks the water will turn clear, often quite dramatically overnight. You then have a “cycled aquarium”.

You may want to do more rigorous and complicated “fish-in cycling” of a tank. It isn’t critical to do this but it is the safest course of action for the fish. Click on this link:

Then there are a bunch of products for cycling which are sold to newcomers to the hobby which simply don’t work. This is very unfortunate.

There was a test run on eleven different “instant start” “bacteria-in-a-bottle” such as Stability which showed they were a waste of money. This link reviews that test:

Note there is no use for Prime or other chemical additions during cycling. You can’t “detoxify” ammonia with chemicals. More about that in:

For  an in-depth discussion of the many ways to successfully cycle a tank and the science behind cycling and the nitrogen cycle, click on this link