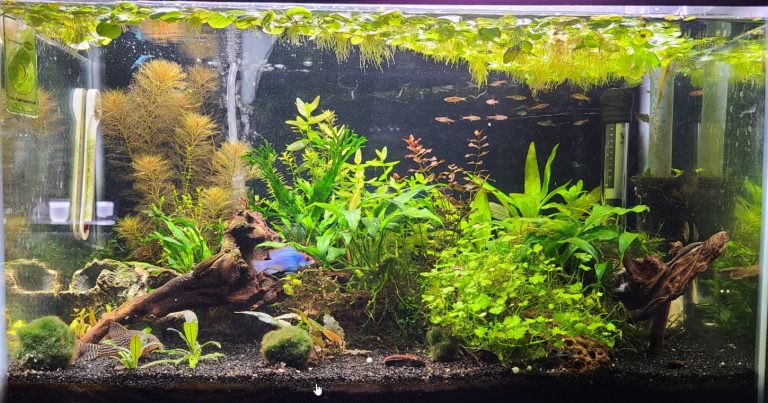 Perfectly clear, indeed sparkling crystal-clear, water is the nirvana of any aquarium owner. This factor is difficult to quantify. But all experienced aquarium owners know what crystal-clear water is. It is just something you know when you see it.

If you watch the aquarium YouTube or Facebook videos only roughly one in ten of the experienced aquarium owners have water that has that crystal-clear look to it. Most have water with a dull, semi-cloudy look.

What is often missed in this discussion the importance of crystal-clear water. It goes beyond aesthetics. The usual reason the water isn’t crystal-clear is because of heavy numbers of infusoria, algae, bacteria and protozoans. The bacteria are the most problematic.

The aquarium above is beautiful but note the ‘dull” water. Also note the lack of either air stone bubbles or “choppy waves” in the aquarium. With a wavemaker or some airstones (i.e. good aeration) this aquarium might well have crystal clear water. I would predict that the fish in this aquarium will be dying at a relatively high rate.

The fish’s immune system is constantly fighting all the bacteria that the gills are exposed to regardless of the type of bacteria. So a lower bacterial count means more immune system resources available for fighting off pathogens. A high bacteria concentration will compromise the immune systems of the fish and can cause any number of disease and pathogen breakouts. All owners of aquariums should strive for crystal-clear water.

If the bacteria count in the water column is low the fish can put all their immune system resource towards keeping pathogens at bay. So fish in bacteria free water are far more healthy that fish in bacteria laden water.

Note that , contrary to popular myth, this does NOT mean water which has a 50% water change done to it once a week.  The only way water changes can compensate for low biofiltration is if the water is changed on the order of 50% to 100% per day. The mechanism is that these water changes reduce the dissolved organic compounds in the water to the point where there is no food source for the organisms that cause cloudy water. Since these organisms do not need a lot of food this requires VERY heavy water changes.

Dull water clarity is due mostly to floating bacteria and infusoria feeding on that bacteria. There are three types of bacteria in an aquarium:

Further information on the topic of bacteria in the water column can be had by clicking the following link:

Surface Area: Elsewhere we determine experimentally that 100 square feet of surface area per pound of fish is required for crystal clear water. This is a very important factor:

Flow: The first two types of bacteria (the heterotrophic bacteria) can double in population every thirty minutes to an hour. So flow and water turn-over becomes a factor. This is where water turnover rate through the filter becomes important. If the water turnover rate is only one times aquarium volume per hour the floating bacteria can multiply freely.

Media Maturity: In addition, it takes one to four months for a good biofilm/biofloc structure (“brown gunk”) to develop in new filter media. If the media is constantly cleaned this structure may never form. This “brown gunk” is largely beneficial heterotrophic bacteria (“beneficial bacteria ain’t pretty”).

Aeration: Another factor is aeration. For every pound of fish in a tank there should be a minimum of thirty square inches of turbulent water air interface. This can be either “choppy waves” on the surface or lots of bubbles.

It is important to note that 100 square feet of surface area per pound of fish is just one of four methods that can produce SOMEWHAT clear water. All four methods are:

What is important here is the difference between “somewhat” clear and “crystal” clear. “Somewhat” clear isn’t bacteria free water. It is water where the large visible particles have been filtered out but the microscopic stuff remains. Packed polyester (Polyfil) will filter out 200 micron particles. Most infusoria will be less than 200 microns and bacteria are 2 to 8 microns in size. This “somewhat” clear water can be very unhealthy water.

Using 100 square foot of filter media surface area per pound of fish will produce much clearer water than the other three methods as filtration by lots of surface area and flow will eliminate something called “DOCs”, or dissolved organic compounds.

Note that pristine waters in nature is often quite turbid. Fish do very well in these turbid waters. But the turbidity is different from what one will see in the TYPICAL aquarium, Turbid water in pristine lakes is loaded with BROWN OR GREEN organic detritus (including very tiny brown detritus and green algae particles) and lots of various algae, protozoa and metazoa. What it won’t have is large amounts of bacteria or dissolved organic compounds.

Bacteria produce water that looks like someone put a little bit of milk in it. What I call “dull water”. It is very slightly WHITE in color. It is the bacteria which are the problem with cloudy or “dull” aquariums.

Note that there are some YouTube folks, Father Fish and Dan Hiteshew at Everyday Fishkeeping for two, who advocate what they call “natural” tanks. Easily 50% of their tanks are clouded with BROWN detritus and have somewhat brown color to the “dull” water. They typically don’t have a lot of filtration. But the fish in their tanks appear healthy. Their tanks use the detritus to do the biofiltration. This brown floating detritus it their equivalent of “brown gunk” in the filter of a normal aquarium.

I don’t like the “natural” look and feel crystal clear water in the artificial environment of an aquarium is the better way to go. But that is only my OPINION!

For a more in depth explanation of this click on these links:

Note that this water clarity and fish health issue is extremely important to fish from the blackwater of northern South America like discus, rams, neons, apistos, and uaru. This is covered in some depth in this link:

Note that there is a huge amount of marketing hype to the effect that Seachem Purigen “polishes water to unparalleled clarity“. Side by side testing reveal this to be just “snake oil” marketing hype. This link has the tests in it: